Review: Breaking Up With Barrett by Katie Regnery 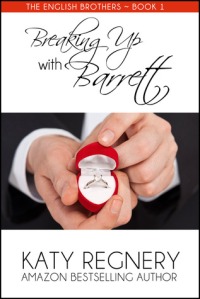 Free Kindle fiction alert! This is a relatively short story, which is part of a series concerning the English brothers, a wealthy set of bro’s. Barrett has been in love with Emily since she was born (which is a little creepy, let’s be honest). Even though she’s just the ‘help” — her parents help take care of the English estate, he still wants to be close to her. He basically hires her as a rent-a-fiance for some of his business functions. They pretend to be a couple, his business dealings go smoother because he brings her along. She makes money enough to swing her rent. No strings attached.

Except of course the two are mega attracted to each other, and finally let their feelings be known. This makes the whole fake fiance situation a little sticky, because it makes Emily feel like a prostitute for being paid to be with him when they are actually involved. So she refuses to give him any lovin’ til their business deal is over.

Basically this book is a huge lead-up to the sex scene, but instead of being cheesy, it’s actually well done. i’m not big on romantic fiction, but I have to admit that this one was pretty engaging. Emily is a smart girl, and Barrett is a typical man, well meaning, but thinking with the wrong body part at times. The chemistry between them is pretty electric, and comes through off the page pretty well.

I ended up liking it much more than I expected, and because it was free, I’m calling this a win! Not sure if I’d read about the other brothers, but maybe at the end of the year if I haven’t hit my reading goal, I might pad my numbers with something along these lines.