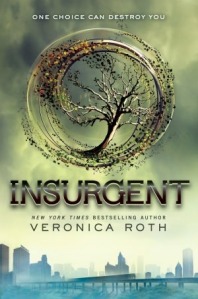 Picking up where Divergent left off, Insurgent finds Tris and Tobias formulating their next move against the Erudite. As the book winds on, they discover a much larger conspiracy which changes everything they have believed.

That’s the nickel version of the book. I had the audio version and it spanned close to eleven hours. It seemed like it was going to never end. I had obviously enjoyed Divergent enough to pick up this one, but Insurgent reminded me that this is a YA series. It showed, because every other scene is Tris and Tobias having some kind of teen drama involving trust (or lack thereof), albeit amidst some rather atypical circumstances. Here’s basically the framework of the book…

(Tris/Tobias) does something outside of the plan, but that is successful and/or uncovers more useful info

(Tobias/Tris) saves them or is somehow instrumental in rescue

It just felt like a roller coaster of action, not necessarily building but rather ebbing and flowing. Even the final scene didn’t really feel like anything major. It was like, oh, something else happened, which is going to lead us to book three, where it is  very likely more gunplay and arguing and Tobias/Tris will probably almost break up a few times.

I’m torn because I have clearly invested some time in this series, so I should perhaps try to finish it. On the other hand, I’m not sure I can handle more of the same. Has anyone read Allegiant, and if so, given my review above, is it better/different?