Review: What Every Body is Saying by Joe Navarro 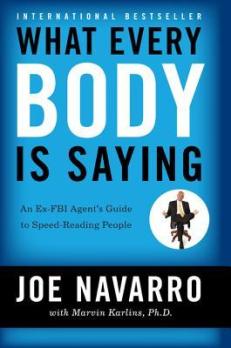 Allright, don’t mess with me now, because I am a MASTER of reading body language, thanks to this book! Navarro, a former FBI agent, shares all of his insight about how to read people’s body language. This stuff fascinates me to no end. As I read the book, I took notes on the key takeaways so I could remember them and put them into use. I’ve noticed my co-workers doing some of the posturing things Navarro talks about.

To give you a taste, here are a few of the findings…

When a person is uncomfortable, the limbic system takes control of the body’s reactions. As with animals, the fight, flight or freeze reflex is visible in humans, as well when fear or danger is present. Freezing is an attempt to draw attention away from yourself. You’ll notice rabbits or deer do this (“deer in the headlights”). Flight is obvious – again, an animal would simply run away, whereas in a social situation, this isn’t an option usually, so the flight reflex takes the form of the person leaning away or putting up a “block” such as crossed arms to distance themselves from the thing/person making them uncomfortable. And finally, the “fight” reflex is when all else fails. If a person feels backed into a corner, whether literally – like in a bar – or figuratively – at a business meeting, they may turn combative.

Interesting stuff, right? Then you can also look to see if the person is using any pacifying behaviors such as touching their neck, mouth, or smoothing their hair. We groom ourselves and use soothing motions on our bodies to try to calm ourselves from our limbic system reactions. So if you see a person doing these sorts of things, chances are they are uncomfortable about something.

What this book doesn’t do is tell you how to tell a person is lying. According to Navarro, it’s not foolproof. All of the “tells” he discusses in his book can help you paint an overall picture of how the person is feeling, but in general is not 100%. While interrogating people, or interviewing them for a job, a person may be uncomfortable just from the situation. This doesn’t mean they are being dishonest.

Anyway, I’m taking all of my learnings and trying them out at work. I’m going to be a total creeper, staring at my co-workers and stuff. No one better try to pull a fast one on me! Knowledge is power!!!