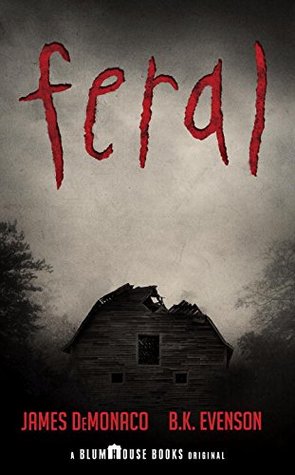 A virus decimates and infects the male population of the world, causing all the dudes to go loco and/or die. The ferals, as they are called, go insane at the scent of a woman and then tear her to shreds. Kind of doesn’t bode well for the future of humanity. Allie is just in high school when the virus takes over, and the book spends a few chapters painting the picture of her high school life, boyfriend, best friend who has some sex tape drama brewing, and then BOOM – virus, and we’re catapulted three years later to this outpost of women-folk who are trying to keep safe from the feral crew.

The book jumps around from POV to POV, which is kind of confusing. Some POV’s seem unnecessary (Jacky?) and then at other times it’s a third-person narrator surveying the scene. I think the book would do better picking a POV (Allie first person, probably) and sticking with it.

Two guys wrote this book, so of course they had to throw in a love scene between two young women, because, why the hell not. I guess if there’s aren’t any men around, you might be inclined to make out with your friend, but to me it seemed like a bit extra. Like when you’re watching Game of Thrones and all of a sudden, a boob pops out for no apparent reason.

So this is teen fiction, by the way! And there’s a lot of sex and f bombs, so take that as you will. This was part of my library spree, so I finished it despite not really loving it. Might make a cool movie, I’d say.