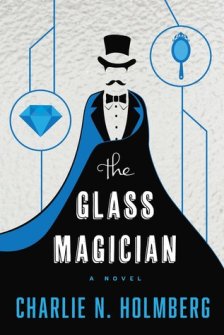 A few weeks ago, I read The Paper Magician and enjoyed it so much, I planned on reading the next two books in a row. Well, I took a little break, but I just read the second book in this series. It was fairly short, so it only took me a couple of hours to get through the whole thing.

I didn’t love it as much as I loved the first one. All of a sudden I found myself halfway through this one and I didn’t really understand what was going on. There are two new bad guys who are after Ceony … one, because of what she did to Lira in book one, and the other one… I don’t know what the other one’s beef with her is, to be honest. Although Ceony is still an apprentice, and basically naive to the ways of the world, she decides she can take on these baddies by herself. Luckily, Emery and her friend Delilah are able to find her and come to her rescue.

The growing romance between Ceony and Emery is also prevalent in this book, with Ceony basically going full-on schoolgirl whenever he’s around. Emery seems to be holding back, but we all know what’s going to happen, here. Am I right?

Overall, even though this book disappointed me compared to the first one, I’m still intrigued by the idea of these different types of magicians … particularly now that we know that the bond between magician and the material of their craft can be broken. I’m looking forward to seeing how this series wraps up. I’m sure it will involve Lira, who is still in her frozen state, and I’m sure the romance angle will be fully in play. Let’s hope it ends on a high note!