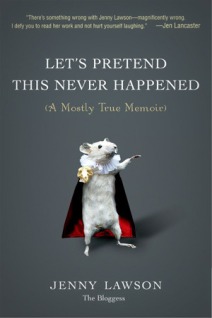 DISCLAIMER: It is quite possible that the following review is being influenced by three things:

So. On to the review. With the above in mind.

First of all,  I don’t think Lawson is as funny as she thinks she is. I’m in the minority of people who are familiar with Lawson’s writing who feel this way, I’d be willing to bet. (You might have heard of her blog, The Bloggess. I read it with passing interest a few years ago, and I had always meant to get this book.) I know that others think she is just hilare, and she definitely can be. She has her moments, but I tired of her pretty easily. And admittedly, I skimmed the last 150 or so pages because I was bored of the whole routine. Anytime I saw a chapter that was made up banter between her and someone else, I just skipped the entire chapter. Not gonna lie.

I felt like she was trying too hard. Like, in grade school, she was probably one of the most dramatic girls. I don’t know if she was in the top three like I supposedly was, but probably top five. Something I feel that I have in common with Lawson is that I desperately want people to think I’m funny. I will sometimes exaggerate or speak self-deprecatingly just to garner laughs and attention.

However, there are some really genuinely funny moments in here. I actually really enjoyed reading about her childhood – her family is seriously, straight-up cray. Like, if the whole book had been stories about her childhood, I would probably have read the whole thing. But instead there was just meaningless chapters about post-it notes and just stupid anecdotes that merited maybe a paragraph mention, but were dragged out to ten pages of her trying to make something funny that wasn’t. Later in the book, I enjoyed the chapter about when her dog died (not because of the dog dying, but because of how macabre it turned out to be when she tried to bury it). I think her fascination with taxidermied animals is really weird, but endearing at the same time. Of course, she does come by it honestly, as her dad own(s?) a taxidermy shop in her hometown in Texas.

I’ll probably go on to read her second book, mostly because my friend gave it to me (hi Laura!), but I think I need to take a break from her for a while. I need to read someone who isn’t as dramatic as me. Hemingway, perhaps.