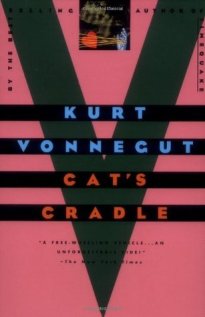 In my quest to read all of Vonnegut’s works in the order they were written, my next stop on the ride was Cat’s Cradle. I have the exact copy that I read when I was a high schooler, complete with my underlined text. It’s kind of a trip to see what I thought was impactful when I was seventeen years old. I mostly still agree.

This was one of my favorites back then, and I enjoyed it just as much reading it now as a grown-up. If you are unfamiliar with Vonnegut, and want to try his books on for size, this would be an excellent starting point. This or Breakfast of Champions would be my two recommendations for a Vonnegut Virgin.

In this one, a writer (we never know his name, but he’s also our narrator) sets out to learn about the inventor of the hydrogen bomb. He meets his three strange children on an island called San Lorenzo, where he meets people in his karass. That’s the term Vonnegut uses to describe “a team that does God’s will without ever discovering what they are doing.” They have in their possession an element called “Ice-9” which their father invented – a dangerous creation that could cause apocolypse if put in the wrong hands. Interwoven throughout the book are the songs and sayings of Bokonon, an island inhabitant who has created a religion that is outlawed. Bokonon himself is an outlaw, a wanted man.

The image of the cat’s cradle is a central theme. You remember the children’s game with a piece of string? If you don’t, it means you’re probably a milennial. Back in my day we played games with string, and we liked it! We also hiked 10 miles to school uphill both ways, in case you were wondering. But the thing about the cat’s cradle game … it’s a string. No cat. No cradle. It’s all an illusion. Perhaps even a foma (that’s a lie).

Do we build illusions around us to make our lives easier to live? It’s possible. We forge connections with people (see: granfalloons – false karasses). Vonnegut explores this with many of the characters in the book.

There’s so much I could say about this book, and I’m not trying to cop out, it’s just really hard to talk about a book that impacted me so strongly in my teen years. I hope you can take my word for it that this is classic, quirky, wonderful Vonnegut and that it’s under 200 pages, so you can get through it quickly. On to the next one!