Review: Winter of the World by Ken Follett 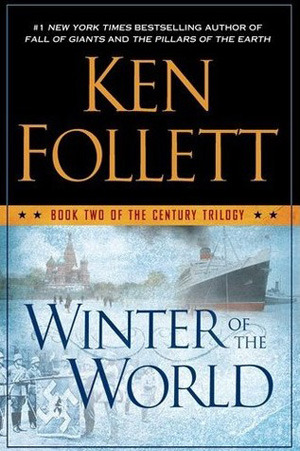 Well, 940 pages later, here I am. This was basically what I read during the month of April.

This is book two in Follett’s “Century Trilogy” and covers the 1930’s and 1940’s. Historically it is right on point. It covers Hitler’s rise to power through the eyes of those just on the margins of his inner circle, as well as various nations’ role in WWII. The same families are featured in this book, but it’s the next generation who are the main characters. Their parents, who were in “Fall of Giants,” still make appearances and play major roles.

I just want to preface this by saying, I am NOT a history buff. I mean, I have a cursory idea of what happened in WWII, but only really from an American perspective. So I really wasn’t aware of what was going on in Russia, or England, or really Germany (other than Hitler) at that time. So that’s interesting to me. Seeing it from all different sides. From a historical perspective, Follett really does a nice job of creating an accurate depiction of the times, and for those of us with not as much background, creating characters and events that allow us to view history through these eyes.

But I have to say, because I’m a shallow person, I really would not make it through these 940 pages were it not for the romance. Yes, it is very interesting that this young man is going to go off to war but OMG he’s the bastard son of this Earl who got it on with his maid! And his brother, who is the Earl’s legitimate son, is a total asshole! And married to the woman the bastard is in love with!

Some of it seems contrived. Like, Follett HAD TO make a character gay. Oh, and then this character CONVENIENTLY gets stationed in Hawaii. Pearl Harbor, to be exact. Wonder what’s going to happen there?

The book ended in the year 1949, with World War II being over. There’s a whole third book that I need to read, but not for a while. Maybe some shorter ones for a while.