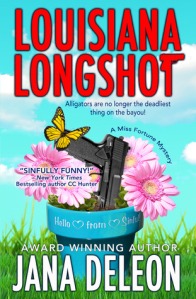 This was a free Kindle download, and so I thought, “why not?” It looked like some romantic fluff, and heck, even I need some fluff once in a while.

I decided to read this on my plane ride out to Vegas this past week. It looked short enough, and seemed like appropriate fodder to kill a few hours.

This was another female comic hero, in the same vein as the Stephanie Plum novels by Janet Evanovich. “Fortune” is a CIA agent forced to hide out in a swamp town in Louisiana, masquerading as a former beauty queen who has inherited her deceased aunt’s estate. Fortune could not be farther from the beauty queen type. She’s a deadly shot, a total loner, despises the color pink and doesn’t wear makeup. She’s immediately befriended by Gertie, a senior citizen and general busybody of the town, as well as her companions referred to as the “Geritol Mafia.” They are anything but quiet old ladies who sit around and knit, though, and Fortune finds herself in the middle of a murder mystery. Along the way, a series of misadventures occur, including a boat trip out to “#2” island – named for its smell of … well … poop.

Such a fun story and memorable characters. I’ll definitely be checking out the other books in this series!