Review: The Book of Unknown Americans by Cristina Henriquez 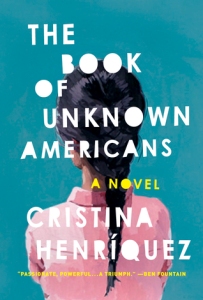 This book attempts to cut through some of the pre-conceived notions us white Americans might have about Mexican and other Latin American immigrants. All have their reasons for coming, but most Americans tend to view them from the same lens. The Book of Unknown Americans shows us the families that have come to the United States and are trying to make a life here.

The book centers around two families, and switches perspective between the mothers and the son in one family for most of the narrative. Occasionally, it introduces the perspective of a minor character, but they all reside in one apartment building in Delaware. These residents form an extended family of sorts, and look out for each other. As with any close-knit community there is gossip and hardly any room for secrets.

Mayor, a teenaged boy, falls for Maribel at first sight. She is recovering from brain damage from a fall at a construction site and her family has come to the U.S. because of the special education she could receive. However, when their families sense a budding romance, they forbid contact. Well, we know from every love story ever told that once two people in love are forbidden from seeing each other, they want to see each other even more.

Their parents are trying to make a go at living in the US, and get used to the culture, the food, and their social status. Back in their home countries, they had nice homes and good jobs … and here, they can’t even get minimum wage jobs.

To me, this was a big eye opener because I admittedly haven’t really ever given much thought to the lives immigrants left behind in their home countries. I just naively assumed they were coming from poverty or horrible living conditions and trying to find opportunity here in the U.S.

This was masterfully told from multiple perspectives, and showed the motivations and emotions driving the decisions made by both the adults and teens. I thought it was touching, funny at times, tragic at others. Great read, one for U.S. natives and newcomers. Strong threads of family, husband-wife relationships and parent-teen relationships throughout.