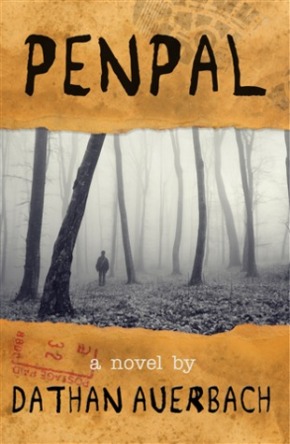 I had never heard of this author before, and knew nothing about this book other than my friend Laura gave it to me and liked it, and she and I have similar book tastes. I’ve been home for the week … that downtime between Christmas and New Year’s, so I thought this one looked like I could tackle it.

It did not disappoint.

Creepy as hell, Penpal is the story of the unnamed narrator, the woods by his house, and a mysterious person who answered a note that he released on a balloon with his class at school. As he writes, he is trying to regain his memory of what happened in his childhood. Each chapter reveals more to the puzzle.

The story begins when his class releases balloons with notes attached to them, asking the person who finds the ballon to write them back and if possible to send a photo of where they found the balloon or where the live. The notes start trickling in to the classroom except for our narrator’s … but when his does arrive, it comes with a Polaroid that just shows a blurry part of the city. More Polaroids arrive, and the narrator realizes that HE is in every photo. *insert screaming emoji*

And it gets weirder from there. The only spoiler I’ll give is that the narrator lived to tell the tale.

This is a quick read for those of you who are into Stephen King-esque types of stories. Makes you not want to venture into woods alone …