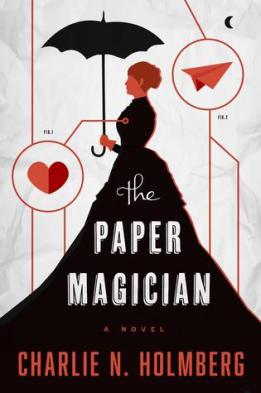 Two more books to make my goal! I’m going to do it!

I read The Paper Magician basically in two days. I got the Kindle version, probably at some kind of a discount because that’s the only time I buy ebooks. I was drawn to the artful cover of the book, with the woman in her Mary Poppins-style dress and umbrella. Knowing nothing about the book going into it, I was pleased to find a cleverly-crafted tale about Ceony (how do you pronounce that? Does it rhyme with “peony” or is more like “Coney” like Coney Island?), a young girl who is sent off to be a magician’s apprentice with a mysterious man named Emery Thane. She’s to apprentice in paper magic, which was not her first choice, but due to a dwindling number of paper magicians in the world, she’s forced into the craft.

Mg. Thane is a quirky man who seems to be harboring a lot of secrets, and Ceony has to try to win him over slowly but surely. However, about a month into her apprenticeship, someone from his past shows up with the intention of killing him. Ceony must try to save him, armed with only the few spells she has mastered so far – with paper as a medium.

I enjoyed the way the story unfolded (get it? Paper? Unfolded?) and loved the imaginative ways paper was used to make spells. Jonto, the skeleton butler in Mg. Thane’s house, is made of paper and can “come alive” and then deanimate back into paper on command. Similar with Fennel, the paper dog Thane makes for Ceony. Paper snowflakes, fans, even paper fortune tellers that I remember from my childhood, all are imbued with magic.

As this is a trilogy, I am anxious to read on to see what happens next. And, as I have two books left to read this year, maybe I will make it those two!