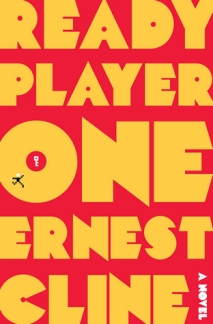 I’ve wanted to read this one for a long time, and I’m not sure why I waited so long. I had heard so many good things, both from online reviewers and people I know, so the bar was set high. I’m happy to report that this book beat the high score for my expectations.

Packed with references to old console video games, 1980’s songs and films, this book is right up my alley. While I wouldn’t say I’m like an 1337 gamer or anything like that, I can definitely appreciate the reverence toward old Atari games and the 8-bit fare that I grew up on.

So, imagine a dystopian world, set about 40 years in the future, where the world is basically wasted and people everywhere are starving. There’s nothing left. So people spend the majority of their time inside this virtual universe called The Oasis. You can go to school there, get jobs there, and explore the many planets the Oasis has to offer, do quests, etc. The creator of the Oasis dies and wills his entire fortune — billions of dollars — to whoever can find an “Easter Egg” he planted somewhere in The Oasis. Wade, known online as Parcival, takes it upon himself to find the easter egg. I don’t think it’s much of a spoiler to tell you that he finds it, because he says so himself within the first few lines of the book. But it’s the journey which is so much fun. As he deciphers the clues to the egg’s location, he and his friends, fellow “gunters” (egg hunters) have to battle and evil corporation bent on discovering the egg and thus the control of the Oasis themselves.

It’s so much fun to read, I was sad when it ended. I wanted to hear more about the Oasis. This was Cline’s first novel, and I’m definitely going to check out his next novel, Armada. It looks like it’s in the same vein.

Ready Player One is for someone in my generation, or someone who loves video games and adventure. In addition, it’s a great buddy story, a slight romance, and just very intelligently written. Great stuff. Would definitely make my top picks for the year unless I read a ton of books this year that blow me out of the water. It’s early, so it might happen!!!!!