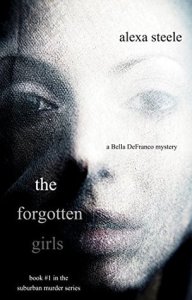 First off – does the author have a cool name, or what? Alexa Steele. Sounds like either a heroine in a spy novel, or a steamy erotica page turner. Either way. This novel is neither/nor.

However, it is an intriguing mystery involving some Real Housewives type ladies, and an unlikely duo of cops trying to figure out who is behind the murder of one of these high society women, as well as two high school girls.

As Bella and her partner, Mack, are called in to investigate the murder, they realize this town has its fair share of lunatics. First there’s the ladies who are apparently the besties of the murdered woman – they’re as catty and unfeeling as any people you can imagine. They claim to be friends, but they’re backstabbers and there are definitely some secrets among the group. Their daughters are growing up in their image – but feeling pressure to make it into the most prestigious schools (which is funny because it seems like these ladies just went for their “MRS” degree, if you know what I mean). They want the best things out of life for their daughters, and so they employ the town shrink, who is an odd bird herself, to prescribe Adderall for the girls. This apparently helps them concentrate and be able to ace their entrance exams for school. However, it also exposes the girls to the shady underworld of drug dealers, as their meager scripts aren’t enough.

It seems that Joslyn, the woman who was murdered, was on to the drug dealing, and as a newspaper reporter, she was in the midst of some research on the story, when she died.

How does it all tie together? Well, I won’t spoil it. This is a fun read, and I believe it’s either free or very inexpensive as a Kindle file on Amazon. I definitely didn’t guess this one. With a major red herring, I was way off base.