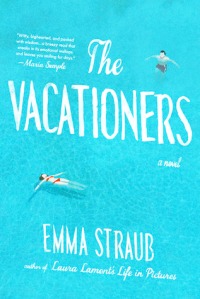 I listened to the audio version of this book, and I’m so glad I did. Kristen Sieh was an amazing reader, giving life to each of the characters. She even did accents which were spot on – including Spanish, Australian and British! She had certain inflections for 18-year-old Sylvia to perfectly emulate a teenager. She just helped shape the mental image for me of who each of these people were.

I could see this book easily being turned into a charming comedy, starring some big-name older comedic actress as Franny, such as Barbra Streisand or Meryl Streep or even Diane Keaton. Certain scenes read like pages right off a Hollywood script.

The Posts are on a two week vacation in Mallorca, along with close family friends, gay couple Charlie and Lawrence. Jim and Franny Post’s marriage is suffering from a recent infidelity (Jim slept with an intern and was subsequently  fired from his job). Bobby and his girlfriend Carmen are going nowhere fast in their relationship. And Sylvia is convinced she will remain a virgin forever after a recent humiliation at a party. Charlie and Franny are very close and Lawrence feels like a third wheel.

The novel covers the two weeks, in which the seven vacationers are forced to deal with the issues in their relationships and in their lives. Everything wraps up neatly at the end, again lending itself nicely to the big screen. It’s hokey at times, and too obvious at others. But it has its quiet, touching moments, as well.

If you’re looking for a lot of action, you won’t find it here. The action is all within the dialogue and in the characters’ own thoughts. This book seems beachy but it will also make you think a lot about family, about marriage, and about how we all often judge others too quickly – and they aren’t always as they seem.

Definitely get this as an audiobook, if you can. It’s only about six hours long, and can be easily digested in a few car rides.