Review: The City of Ember by Jeanne Du Prau 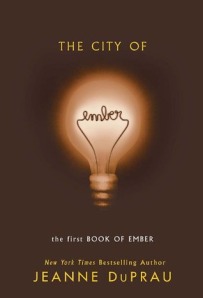 Here I am, back to reading novels from the children’s section of the library. The City of Ember is the multi-award-winning first book in a series of at least four novels that I’m aware of. Ember is an underground city, stocked with canned goods and basic supplies for the city’s population to survive. Lina is a 12-year-old girl who is about to finish with school and get assigned to her job. 12-year-olds are assigned jobs at random and must keep them for three years before they are assessed and get to switch if they are not doing well in their current role. Lina selects Pipeworks, which means she will be down in the labrynth of underground workings below the city. Doon, her classmate and ex-friend, offers to switch with her, giving her the job of Messenger, which was her first choice.

Supplies are running low, and there are power outages happening on a more frequent basis, threatening to send Ember into permanent pitch darkness. The citizens are starting to panic.

Lina’s grandmother is losing her mental faculties but is desperately looking for something in the closet that was lost many years ago by one of the former mayors of Ember. What Lina discovers may be the key to saving the people of Ember.

I wouldn’t call this a great work of literature by any stretch – but it was engaging and mysterious. For a young reader, this could be a great new series to try out. I read on and on to find out what Lina and Doon will do with the message they find, and what they can uncover unground in the Pipeworks. Hard to go any further on this review without major spoilage, so I’ll just leave it at that.