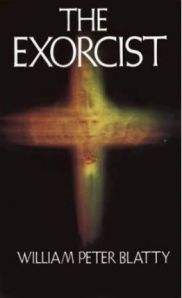 This is the 40th anniversary edition of this book, which is hard to believe. Billed as one of the most terrifying horror novels ever, The Exorcist is the book which inspired the famous movie.

I would say that yes, the novel is disturbing, but definitely not the most terrifying I’ve ever read. That honor would belong to “It” by Stephen King. My other comment would be that this book has not  stood the test of time. There are some mannerisms of speech, especially by Chris, Regan’s mom, that seem antiquated now.

The movie, however, is definitely one of the most terrifying of all time. I think with a horror novel like this, you really need a visual to truly understand the grotesque nature of this possession. The voices, the physical manifestations of the demon within Regan’s body … it just doesn’t come across on paper as it does in the film.

If you are one of those people who likes to read the book upon which a movie was based, and you’re a horror fan, you should definitely give this one a read. It’s not a literary masterpiece, but for a novel written 40 years ago, it’s edgy and weird and messed up.