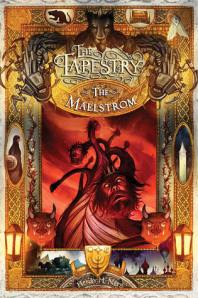 Book Four continues Max’s saga but some time has passed. Max is now basically grown, has gone on some side quests in between books, and has returned to Rowan to find things on the brink of war. We see a more mature Max emerge as a leader, no longer the young schoolboy just learning the ropes. But we also see that there’s a dark side to Max that he is tempted to unleash.

I liked this book as much as the others, especially because Neff sets up the premise early on in the book that there is an assassin hunting Max, and it is going to be the face of someone he knows. The element of mistrust of even his closest allies means Max has to rely on himself more so than usual. It is interesting to see who the “traitor” is going to be.

The Maelstrom also strengthens the character of Mina, who first appeared in book three when Max rescued her from a farmhouse and discovered she had some extraordinary magic talent. Mina is now a student at Rowan, studying under some fairly prestigious tutelage (to say the name would be to spoil the entire series, basically). Her powers are more than a 7-year-old can even comprehend, so that makes her both amazing and dangerous. I think she will factor even more greatly in book five which – sniff – is going to be the final book in the series. It doesn’t appear to be out yet, either! Which means that now, I wait. Hopefully Henry writes faster than George R.R. Martin. 🙂