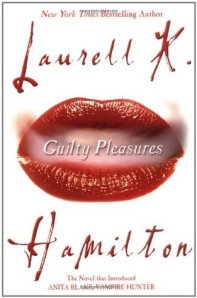 I had wanted to read this book for a while – her name gets brought up whenever you talk of Sookie Stackhouse or other vampire novel heroines. Anita Blake has a strange skill – she can raise the dead – but in this novel, she is asked to solve a series of vampire murders. Yes, this is a world in which vampires, werewolves, ghouls and zombies are roaming free, accepted as part of society (albeit a dark part). Other than that, I’d say that Anita and Stephanie Plum (from the Janet Evanovich series) could be besties. Anita and Stephanie are definitely similar heroines – tough chicks who get themselves in over their heads in trouble at times. Sassy, taking no guff from anyone, but liable to fall prey to a handsome man’s charms. However, Stephanie has never seen the likes of a king wererat in the sewers, a master vampire who looks like a child, but who is over a thousand years old, or a human, covered in scars from vampire bites – because he LIKES it.

Anita’s world is definitely a lot more violent and gory than Stephanie’s. The vampires are pure evil, manipulative, power hungry. They think nothing of killing. In fact, they enjoy it. Vampire Bill from True Blood would be laughed out of town by this crowd.

I wasn’t as engrossed in this novel as I have been for some of the other paranormal series I’ve read. But I am glad I tried it out for comparison. I may, at some point in my life, grab the next book in this series just to see how it is. But for now I think I’ll stick to Sookie and Stephanie for my guilty pleasure reading.