Review: Dead as a Doornail by Charlaine Harris 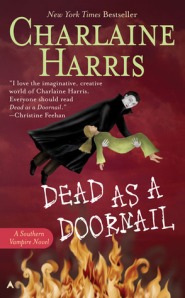 I realized that I am really behind on my reading, and have some huge books on my TBR list right now, so I quickly picked up this next Sookie Stackhouse novel and plowed through it on a Saturday. This is book five in the series, and so far, the books have loosely corresponded to the HBO TV series True Blood. Dead as a Doornail is the point where the series no longer follows the book, as there is no familiar material here. Season 5 was last year on HBO and largely dealt with Lilith, the alleged creator of all vampires. DaaD deals with a mysterious person who is targeting all the “shifters” in Bon Temps. Sam Merlotte is shot (not killed) as well as two other were-type shifters.

Also, Jason experiences his first shift into a werepanther. In the TV series, he is not turned.

There’s a side plot involving Alcide’s father, Jackson, trying to become Shreveport packmaster. As we know on the TV series, it’s Alcide who tries (and succeeds) to become packmaster. Also a side plot, which isn’t quite developed to my satisfaction, is Sookie’s friend Tara, who has shown up at Merlotte’s with a sketchy vampire that Sookie doesn’t trust one bit.

And then there’s all the dudes who are vying for Sookie’s attention. Bill, Eric, Alcide, Sam, a new character named Quinn who is a shifter into a tiger, and a couple of others. Man, it must be nice to have to shake off the dudes with a stick! She doesn’t actually choose any of them in this novel, but she’s got enough going on between being shot herself, and having someone try to burn down her house.

Although missing some of my key faves from the TV show (Lafayette was killed in book one and wasn’t nearly as fabulous when he was alive), Dead as a Doornail is an entertaining story in and of itself, especially if you have been watching True Blood and want to follow the action as the author originally intended it.