Review: The Round House by Louise Erdrich 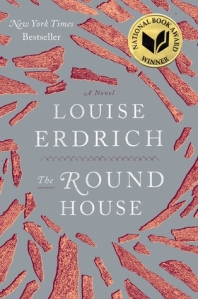 The 2012 National Book Award winner by Louise Erdrich was the third of the author’s works I’ve read. I read The Beet Queen (twice – but I was about a third of the way through the second reading before it hit me that I’d read it before) and The Master Butcher’s Singing Club. MBSC was probably my favorite of the three, although I would have to Google it to tell you anything about it. There was a butcher. There you go. And now you know why I have this blog!

In a nutshell, The Round House is about a Native American family dealing with the aftermath of the mother’s rape and assault. She survives the ordeal by escaping from her attacker, but is severely traumatized for weeks afterward. Her son, Joe, the narrator of this story, tries to deal with this crime and process it in his 13-year-old brain. He has the support of his best friend, Cappy, as well as their two other buddies, in trying to bring the attacker to justice.

There are two sub-plots in this story. One that involves a Catholic priest who shoots gophers, is muscular, and has a mysterious past. Honestly I didn’t really grasp where this plot was going, or if it ever resolved. I’m sure there was some metaphoric spiritual thing happening here, but it’s been almost 20 years since my last English class, so I’m a little rusty on pulling those things together from the plot. I almost wish there was more in the story about the priest. He was one of the most interesting characters in the book.

Joe found a crapload of money at one point in the book, and while I’m fairly certain the money tied in to his mother’s attacker somehow, I don’t think it was ever said for sure. The woman he confided in, Sonya, disappeared with most of his funds, making a new life for herself. Also somewhat connected to the attacker.

I don’t know if it’s just that I’m not smart enough to grasp the unsaid, implied portions of this novel, or if there was a lot left unsaid. Maybe I should go back to reading the cat haikus.

What I did grasp of this novel, though, was intriguing. Erdrich offers a very real slice of life on a reservation, the traditions of yesterday in a modern world, the power of family, and a violent act realized through the eyes of a young person. It’s easy to see why this book has such high acclaim.

As to who would enjoy The Round House, I would say someone who enjoys literary fiction, who has survived a high school or even college level English class, and who is ready to delve into the deeper meaning hidden behind the words. That used to be me, I think, but these days, I think I’d rather be hit more overtly over the head with the meaning.