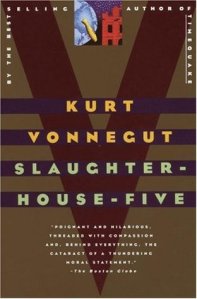 In high school, this book and Breakfast of Champions pretty much changed my life as a writer. Prior to this I had envisioned myself as the next coming of Stephen King. Once I read Vonnegut’s writing style, I had a new idol.

I recently re-read Slaughterhouse Five because I honestly remembered nothing about it from almost 20 years ago when I read it the first time. It’s been awhile since I read some Vonnegut and I wanted to see if I still felt the same way about my writing idol.

I have to say that in reading this the second time around, I wasn’t as enthralled with it. I’d become accustomed to all the quirkinesss and Vonnegut-isms that pepper all of his books. The “so it goes” and whatnot.

What is this book about? It’s about the ugliness of war and what it can do to the human psyche. It’s about coincidence. It’s about aliens. It’s about friendship. Vonnegut is a master a subtle political commentary, often done through humor. The author was known for his anti-war stance and liberal political views.

Why was this book banned? Religious themes (although I can’t for the life of me remember any), but I’m sure the politics also played a part. The Kurt Vonnegut Memorial Library was offering free copies of this book to high school students in Republic, Missouri, whose school had banned the book. I think that’s pretty cool. Read more about that here.

As a Vonnegut uber-fan, this one is probably pretty far down on my list of faves. I am going to re-read Breakfast of Champions next, which was my favorite when I read all his books 20 years ago. I’ll probably slowly make my way through the rest of his collection again, too.

Vonnegut passed away in 2007. Later in life he made many public appearances, including one at Kent State University a few years before he passed. I wish I had known because I would have loved to see him or even have a chance to meet the man who I consider to be one of the greatest writers of the 20th century.